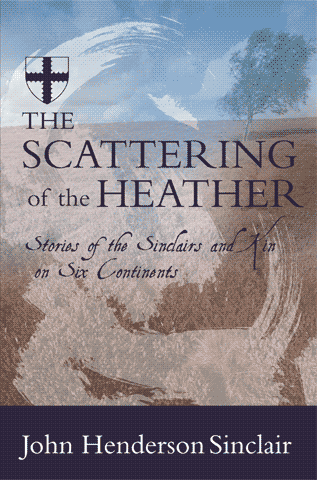 The Scattering of the Heather: Stories of the Sinclairs and Kin on Six Continents

The Scattering of the Heather tells the stories of the Sinclairs of Caithness who put down roots on far-flung frontiers in six continents over the past two centuries. These persons were not high ranking members of society but women and men whose lives were lived with dignity and honor. They have left their footprints as social, intellectual, and religious activists and have spread the seed of Scottish culture and values wherever it has found hospitable climate and soil. “What an absolutely delightful book! It gives life to people who otherwise would just remain names on charts. It brings ancestors back to life. I enjoyed immensely reading the book and would recommend as necessary reading for anyone with Scottish ancestry. Beautifully written, compelling, and a true delight to read.”—Margaret Sinclair Stokes, former chair of Clan Sinclair of Australia and noted family genealogist “A lovely narrative of a family history. The discovery of his origins in Caithness, Scotland, in the late-eighteenth century led the author on an intriguing quest. He traced his ancestors across oceans and continents—where they lived, their struggles and achieve-ments, their heartbreaks and victories. As a family historian, I’ve always thought that vital statistics kill interest except for the researcher. John has put flesh and blood on their bones and created heartbeats. Well done!”—Toni Sinclair, editor of the Clan Sinclair Association of Canada’s newsletter Over the past two decades, John Henderson Sinclair has traveled far and wide throughout Australia, New Zealand, South Africa, the People’s Republic of China, Chile, Venezuela, Colombia, Great Britain, and North America, researching the lives of his scattered relatives. John Henderson Sinclair served in active ministry for forty years as a pastor, missionary, educator, mission board executive, and human rights advocate. He is the author of several missionary biographies, including El Escoces con Alma Latina on the life and work of theologian and missionary John A. Mackay.

Title: The Scattering of the Heather: Stories of the Sinclairs and Kin on Six Continents

The Scattering of the Heather: Stories of the Sinclairs and Kin on Six Continents